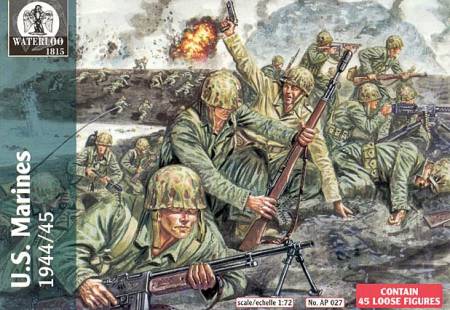 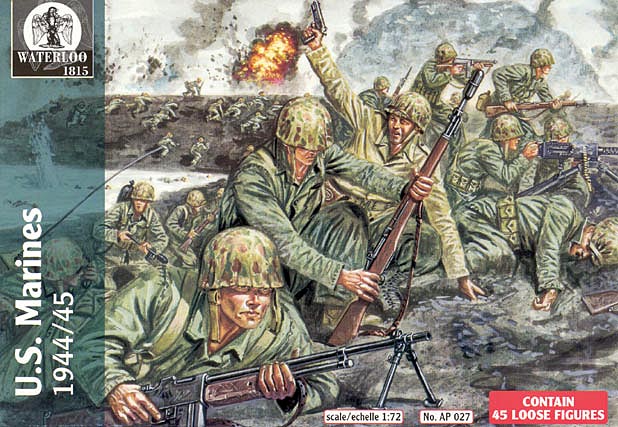 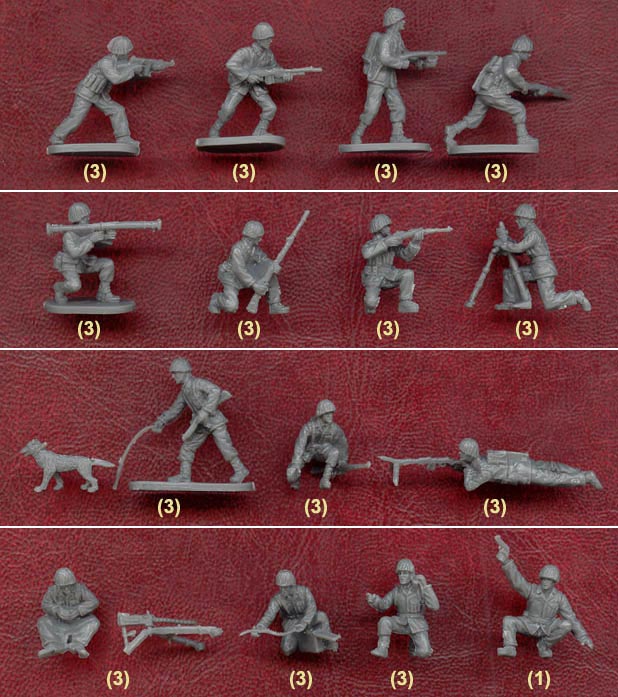 When the US went to war in December 1941 the Marine Corps (USMC) numbered almost 66,000 personnel, but by the war's end that figure was approaching half a million. During those four years the Corps had mostly been employed in the Pacific theatre, winning back island after island from the Japanese and eventually threatening the home islands themselves. The many bloody steps of that journey have been well documented, and the Marines themselves have been immortalised in 1/72 scale plastic several times, so the question is, does this set offer anything that the hobby hasn't already seen?

The many photographs of Marines show that they wore a huge variety of clothing, dictated partly by what was available and partly by local preferences. All the figures in this set are dressed in much the same way, which in itself is far neater than the reality, but that is a very common observation for figure sets. They appear to wear 'utilities', which was the herringbone twill fatigue uniform most commonly worn in combat. The 'jacket' - really more of a shirt - has two skirt pockets and one on the left breast, which matches the 'utilities' garment, although here it is a little too long and gives the appearance of a thicker, true jacket rather than the creased and crumpled appearance of the real thing. The trousers and boots look OK, and a few of the poses wear the trousers tucked in to short gaiters which were so often discarded by the men. All have the M1 helmet, which in all cases have a cover, which was a mark of the Marines.

Marine kit, referred to by the men as '782 gear', was similar to that of the Army, but the Marines preferred to be as lightly encumbered as possible when in action (although naturally such things as amphibious assaults required a great deal of kit). Nevertheless we felt that these men are rather too lightly equipped. Some of the men have one or two canteens, and a few have the upper knapsack with entrenching tool attached, although none have the lower haversack. Many have the necessary ammunition pouches on the belt, although these are sometimes too few. However that is the limit of the kit, which means all manner of possible items are missing including bayonet scabbards, extra pouches and, most importantly, knives. None of these things are absolute essentials, but we felt they should have been represented in such a set.