Panzer Aces is a color system designed in collaboration with Panzer Aces Magazine for reproducing the colors of the uniforms of the tank crews and general armored forces of World War II. In order to simplify the method of painting the specialists on the staff of Panzer Aces have created a series of colors which coincide with the standard shades of these uniforms. All the uniforms consist of a base color and a lighter color for highlighting and grading. Three colors have been selected for the fleshtones, as well as a series of colors to reproduce the design of Splinter Camouflage, printed on many of the garments and canvas equipment of the German Army.Includes VMC301 Light Rust, VMC302 Dark Rust, VMC303 Yellowish Rust, VMC304 Tracks Primer, VMC305 Light Rubber, VMC306 Dark Rubber, VMC307 Red Tail Light, and VMC308 Green Tail Light. 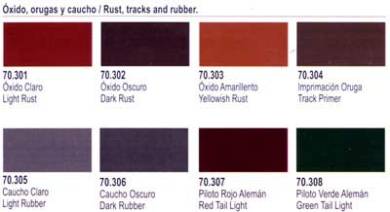 Type = Paint, Glues and Finishing Supplies
Category = Paints
Date of Release = 2022-09-09
Status = Available
This item is Normally Stocked but may take up to two weeks for delivery if not in stock. We will notify you of any delays
MSRP: $29.99
29.99