During the production of the Sd.Kfz.8, DB 10 type, an armored body was designed & tested to protect the artillery tractor. The armor was 14.5mm thick AND had double doors at the rear of the hull, possibly for ammunition stowage. It is a rare variant and probably a prototype as only three photos of its use on the Eastern Front have been published. In the photographs, one can see that they were issued to the Luftwaffe and were used to tow 88mm Flak guns. One was found in a river at Pilica, in Poland, and restored. Kit consists of over 700 parts on 21 sprues plus upper & lower hulls, rubber tires, individual track links and photo-etched detail parts. 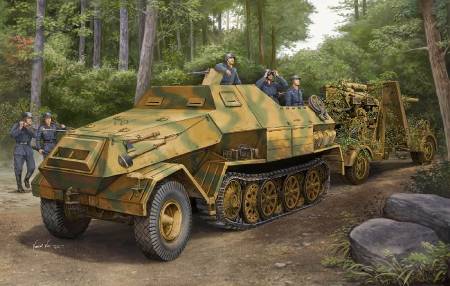 Type = Models
Period = World War 2
Scale = 1/35 Scale
Material = Plastic Kit with Photo-etched Details
Finish = Unfinished Model Kit
Date of Release = 2011-11-01tmpx
Status = Available
This item is Normally Stocked but may take up to two weeks for delivery if not in stock. We will notify you of any delays
MSRP: $64.99
Detect Manufacturer Monthly Specials
Coupon OK on this Manufacturer
Monthly Special S was here !!!
Available
Empty Status
20% competitive overwriting
Our price $51.99