The Tim Mee WALKER BULLDOG M41 TANK 13 piece playset is ready for your next backyard battle. This #7520 tanks is proudly manufactured in the United States and includes 12 tactical soldier figures. The tank features an elevating barrel, turret that rotates, hatch that opens to reveal a fixed gunner, rolling wheels, and a storage compartment in the back. It measures 10.25 inches long (14 inches including barrel), 6 inches wide and is approximately 1:24 scale. Made from slightly stiff olive green color HDPE plastic with lots of crisp detail. The figures are made from slightly flexible LDPE plastic and feature a high level of detail with very little flashing. Figures stand up to 2.6 inches tall, are approximately 1:30 scale.
Modeled after the M41 Walker Bulldog light tank, PROCESSED PLASTIC COMPANY (Tim Mee's parent company) first produced this tank around 1983 and often described it as an M60 tank. The figures were first produced as S.W.A.T. police in the late 1970's, but this is the first time they've been manufactured in green. As an extra bonus, a sticker sheet is included with stars, flags and the classic Tim Mee serial numbers.
This is one of the largest ARMY MEN type tanks ever made and dwarfs the 1:48 scale Tim Mee Patton Tanks. These are real toys, meant to be set up, knocked over, picked up and played with for years to come. Packaged in a plain polybag and recommended for ages 5 and up. 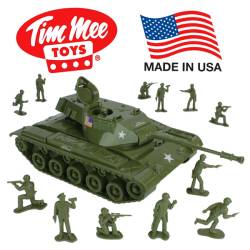