Return of the Jumbo: From a Galaxy far-out and away, long-lost classic underground Sci-Fi toys from the 70's are back--BIG time. This set of TIM MEE GALAXY LASER TEAM - STAR PATROL figures is proudly manufactured in the United States, and includes six bright green figures of considerable size. All the favorites are here, including turtle-lobster alien, space-sasquatch alien, classic serial space hero, mailbox-shaped droid, sword-wielding villain, and even a Mercury era astronaut.
Figures stand up to 4.75 inches tall (120mm) and are approximately 1:15 scale. Made from slightly stiff HDPE plastic with medium detail and very little flashing.
Originally produced by PROCESSED PLASTIC (Tim Mee's parent company) around 1979, they were the larger follow up to the 2 inch space figures released a year earlier. The larger space figures were usually branded as STAR BATTLE and were only manufactured for a couple of years. The molds have long been thought to have left the United States, but were unexpectedly found in 2014. These figures celebrate a funky mash-up of space movie characters from the old black and white serials to that famous space opera in a galaxy far-far away. For the Jumbo Team's triumphant return to production, the manufacturer has restored the vintage TIM MEE TOYS logo that was retired decades ago.
These are real plastic heroes and villains, meant to be set up, knocked down, picked up and played with for years to come! Packed in plastic bag with header card and recommended for ages 5 and up. 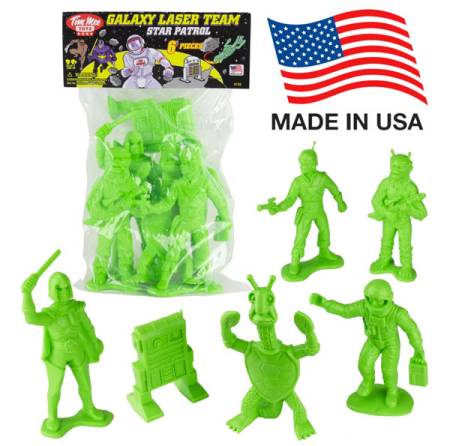