Designed by Dr. Ferdinand Porsche, the amphibious Schwimmwagen was used by the German land forces, paratroopers, and engineering corps during World War II, fulfilling both reconnaissance and liaison duties. Capable of both two- and four-wheel drive, the Schwimmwagen was widely respected for its ability to maneuver on a variety of difficult terrain. Featuring a high-set exhaust pipe and a rear-mounted 25hp air-cooled four-cylinder 1,130cc engine, the Schwimmwagen could reach top speeds of up to 80km/h on land and 10km/h in water. Propelled in the water by a screw propeller which was easily raised above the rear engine deck when driven on dry land, steering whilst in the water was done just like on land, using the front wheels as rudders. Mass produced from 1942, 14,276 type 166 Schwimmwagen were produced by the end of 1944. 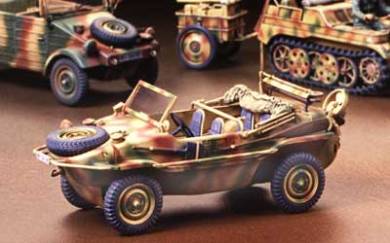