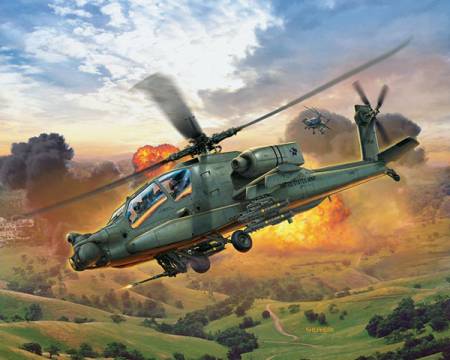 Introduced in 1984, the AH-64 Apache is powered by twin GE® T700 turboshaft engines and includes a tandem cockpit, which seats two pilots. Weapons featured on the Apache range from a 1.2 in. (30 mm) M230 Chain Gun to Hydra 70 rocket pods to AGM-114 Hellfire missiles. The Apache was used in the 1989 invasion of Panama, Operation Desert Storm in 1991 and Operation Iraqi Freedom in 2003 as well as providing an airborne punch in many other conflicts. Kit features rotating main rotor, laser system, sensors, cannon, decal set for a US Army version.