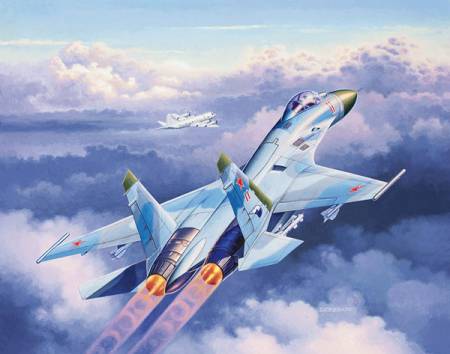 Easily one of the most maneuverable fighter aircraft to ever take to the skies, the Sukhoi Su-27 was the Soviet Union's answer to American fourth-generation fighter designs. It is one of the few aircraft in the world capable of performing "Pugachev's Cobra"-a demanding stunt in which the nose of the aircraft rears up and back to vertical before lunging forward like a striking snake. Coupled with speeds above Mach 2 and impressive armament, this maneuverability makes the Su-27 a master of the sky. Kit features detailed undercarriage, pylons with guided weapons, and full decals.


Type = Models
Period = Modern
Scale = 1/144 Scale
Material = Plastic
Finish = Unfinished Model Kit
Date of Release = 2016-10-01
Status = Available
This item is Normally Stocked but may take up to two weeks for delivery if not in stock. We will notify you of any delays
MSRP: $5.99
Your price$5.99