You can now fight the largest tank battle in WW2, Kursk with this Mid/Late war Russian tank battalion box set. Whether you are trying to stall the German forces during the summer of 1943 or pushing them back to the gates of Berlin, this box set will give you the chance to recreate some of the greatest tank battle during WW2. Included you will get a massive 21x T34/76's or 85's and 5x T70's. Also include will be a decal pack with stars, guards, slogans and turret numbers 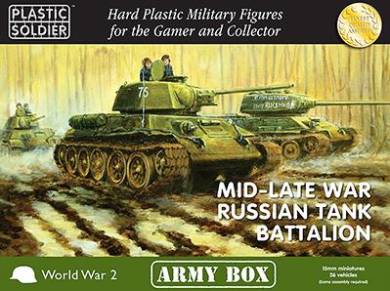 Type = Figure Kits, Busts and Accessories
Wargaming
Category = Wargaming Vehicles and Miniatures
Period = World War 2
Scale = 15mm (.6 inches or 1/100 Scale)
Material = Plastic
Finish = Unpainted
Date of Release = 2016-01-18
Status = Out of Stock
Darn it! This item is currently out of stock. You may order this item now and we will notify you when it's available again.
MSRP: $96.99
Your price$96.99