This kit was inspired by the Jules Verne novel 20,000 Leagues Under The Sea. Includes detailed squid display base. 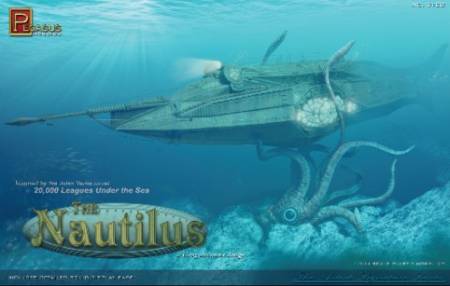 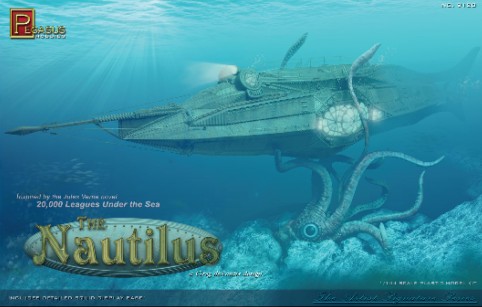 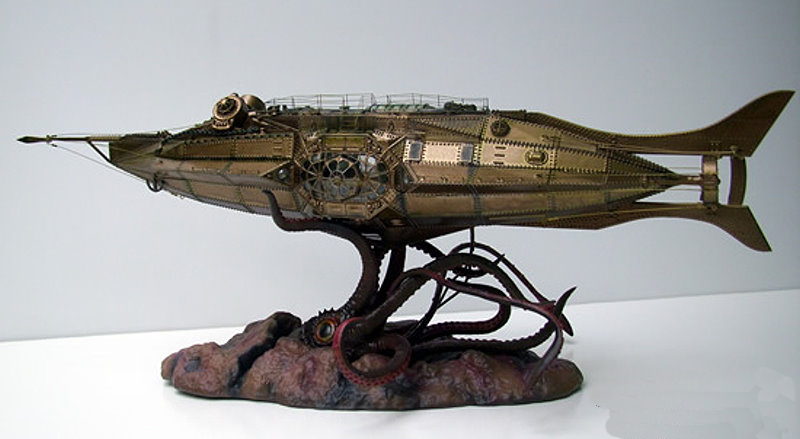 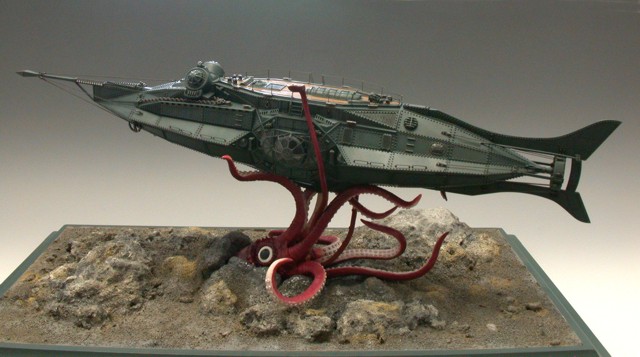 The Nautilus is described by Verne as "a masterpiece containing masterpieces." It is designed and commanded by Captain Nemo. Electricity provided by sodium/mercury batteries (with the sodium provided by extraction from seawater) is the craft's primary power source for propulsion and other services.

The Nautilus is double-hulled, and is further separated into water-tight compartments. Its top speed is 50 knots. Its displacement is 1,356.48 French freight tons emerged (1,507 submerged). In Captain Nemo's own words:

Here, M. Aronnax, are the several dimensions of the boat you are in. It is an elongated cylinder with conical ends. It is very like a cigar in shape, a shape already adopted in London in several constructions of the same sort. The length of this cylinder, from stem to stern, is exactly 70 m, and its maximum breadth is eight metres. It is not built on a ratio of ten to one like your long-voyage steamers, but its lines are sufficiently long, and its curves prolonged enough, to allow the water to slide off easily, and oppose no obstacle to its passage. These two dimensions enable you to obtain by a simple calculation the surface and cubic contents of the Nautilus. Its area measures 1011.45 square metres; and its contents 1,500.2 cubic metres; that is to say, when completely immersed it displaces 1500.2 cubic metres of water, or 1500.2 metric tons.

The Nautilus uses floodable tanks in order to adjust buoyancy and so control its depth. The pumps that evacuate these tanks of water are so powerful that they produce large jets of water when the vessel emerges rapidly from the surface of the water. This leads many early observers of the Nautilus to believe that the vessel is some species of whale, or perhaps a sea monster not yet known to science. To submerge deeply in a short time, Nautilus uses a technique called "hydroplaning", in which the vessel dives down at a steep angle.

The Nautilus supports a crew that gathers and farms food from the sea. The Nautilus includes a galley for preparing these foods, which includes a machine that makes drinking water from seawater through distillation. The Nautilus isn't able to refresh its air supply, so Captain Nemo designed to do it by surfacing and exchanging stale air for fresh, much like a whale. The Nautilus is capable of extended voyages without refuelling or otherwise restocking supplies. Its maximum dive time is around five days.