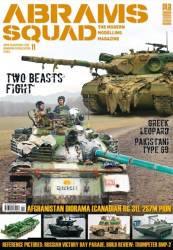 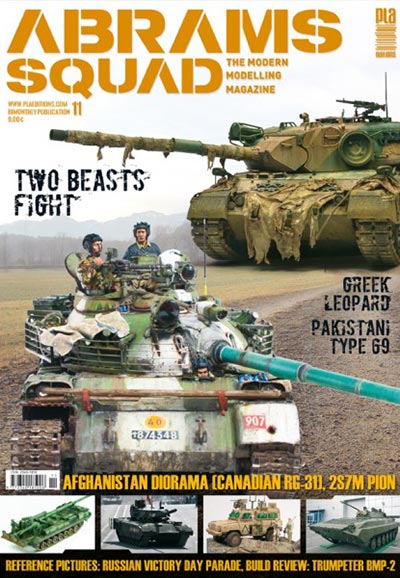 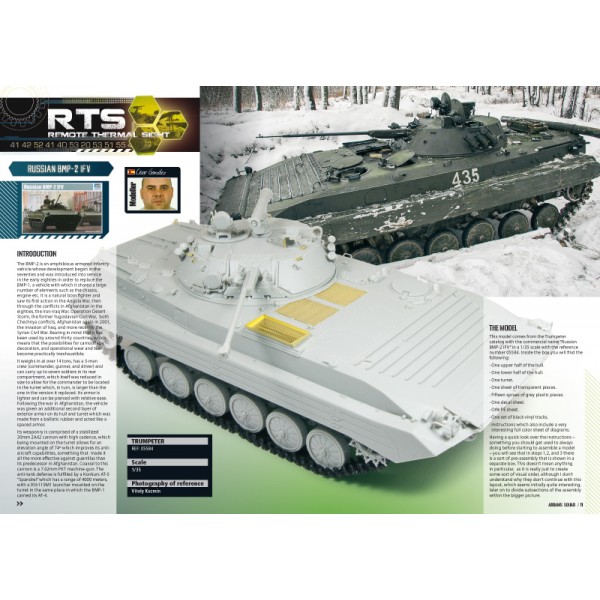 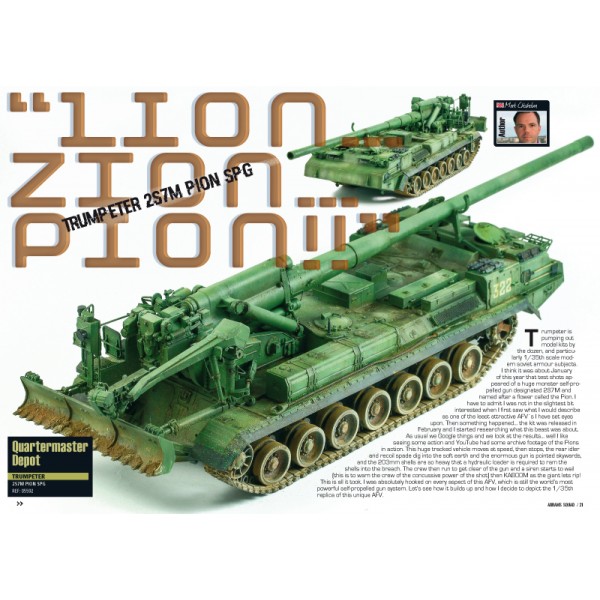 Contents:
4 - Commander's Display Unit: A regular section devoted to news and reviews of model kits, aftermarkets, books and much more.
10 - Remote Thermal Sight: This issue is opened by Trumpeter's BMP-2 in our build and review section. Some time ago Trumpeter's BMP-1 become a very popular kit among modellers, and soon we saw many of these kits finished in shows and magazines. Now the Asian company delights us with its more powerful successor.
20 - 2S7M - Lion. Zion. Pion!!: This time it's Mark Chisholm who joins the Squad. He brings us a just released model, the huge self propelled gun 2S7M Pion. It seems like Trumpeter is specializing in subjects with great dimensions
and great quality.
34- Pakistani Type-69: This job caught everyone's attention in the latest international show in Mosonmagyaróvár (Hungary). Andrey Grechkin is a young Russian modeller with incredible talent and a very good friend of this
company. We are sure he will not disappoint you.
44 - Leopard 1A4GR - The trace of a German feline in Greece: And if we are talking about talent, we can't leave aside one of the most regular collaborators of this magazine, Łukasz Orczyc-Musiałek. This time he masterly deals with a Meng's Leopard 1A4, finishing it with the livery of the Greek Army.
56 - Backroads of Afghanistan - RG31 and BRDM-2 Diorama : It's a fact that Post-World War Two AFV Models are popular, however we can't easily find good quality scenes and vignettes. Fortunately, we found it possible to publish a very nice scene from Vlad Adamec, making a good composition with a realistic terrain and two vehicles: one MRAP and one Russian wreck.
68 - Victory Day Parade, Moscow 2015 - New Armour for Russia: Our friend and collaborator Vitaly Kuzmin was making reports from the Victory Day Parade in Moscow last May as well in the previous rehearsals. There the Russian Federation showed to the public their new Armoured Fighting Vehicles: Armata, Bumerang, Kurganets and many more. Don't miss it!
72 - Turret Basket: at the end of every issue you'll find the kits that we'll find in the market soon and some teasers of the next Abrams Squad Magazine.
76 Pages - ALL TEXTS IN ENGLISH


Type = Books, Magazines, Catalogs and Videos
Category = Magazines- Modeling Armor
Material = Magazine
Date of Release = 2015-07-16
Status = Available
This item is Normally Stocked but may take up to two weeks for delivery if not in stock. We will notify you of any delays
MSRP: $18.99
Your price$18.99