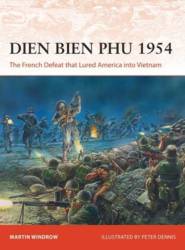 In late 1953, the seventh year of France's war against the Viet Minh insurgency in its colony of Vietnam, the C-in-C, General Navarre, was encouraged to plant an ‘air-ground base' in the Thai Highlands at Dien Bien Phu, to distract General Giap's Vietnamese People's Army from both Annam and the French northern heartland in the Red River Delta, and to protect the Laotian border. Elite French paratroopers captured Dien Bien Phu, which was reinforced between December 1953 and February 1954 with infantry and artillery, a squadron of tanks and one of fighter-bombers, to a strength of 10,000 men. Giap and the VPA General Staff accepted the challenge of a major positional battle; through a total mobilization of national resources, and with Chinese logistical help, they assembled a siege army of 58,000 regular troops, equipped for the first time with 105mm artillery and 37mm AA guns. Here, author Martin Windrow describes how from their first assaults on 13 March 1954, the battle quickly developed into a dramatic 56-day ‘Stalingrad in the jungle' that drew the attention of the world.


Type = Books, Magazines, Catalogs and Videos
Category = Books- Osprey Campaign Series
Period = Vietnam War
Material = Softcover Book
Date of Release = 2021-07-28o
Status = New Release
Normally Stocked, may take up to two weeks for delivery if out of stock. We will notify you of any delays
MSRP: $24.00
$19.20