In the immediate aftermath of Pearl Harbor, the Japanese launched an attack on the Philippines to eliminate the United States’ other major Pacific naval base. Catching the US forces completely by surprise, the Japanese bombed the major airfields and quickly gained air supremacy. They followed with a full-scale invasion that quickly rolled up US–Filipino opposition and captured Manila. Meanwhile US forces, under the leadership of the Douglas MacArthur, created a series of defensive lines to try and stop the Japanese advance. Despite their efforts, they were continually pushed back until they held nothing more than the small island of Corregidor. With doom hanging over the US–Filipino forces, Douglas MacArthur was ordered to fly to safety in Australia, vowing to return. Nearly five months after the invasion began, the US–Filipino forces surrendered, and were led off on the ‘Bataan Death March’. This book covers the full campaign from the planning through to the execution, looking at the various battles and strategies that were employed by both sides in the battle for the Philippines. 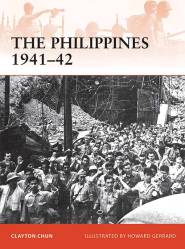