'Soldiers of Rome' is a full battle game, utilizing units of between 8-20 models (cavalry is 4-8 models), in either small fast moving Raids, Field Battles (the standard line-up and fight) or Siege Assaults (one sides gets a fortress to defend, the other attacks it).
It is card-driven, using an action card deck (which will come with the rulebook), to give orders to each of your army's 'Battles'. A 'Battle' is a sub-division of the army, a third of it, either the left, centre or right Battle. These can all act together on the same action card.
The way action cards and Battles interact is governed by your overall Battle Plan, which is a pre-chosen plan of attack (or sometimes defence), which dictates which cards your Battles get for this engagement. These set cards are then added to with random drawn ones, so each game gets an entertaining level of unpredictability, and the cards will never allow a game to be played the same way twice - even if you you used the same forces, over the same terrain, with the same battle plans, the game would still play-out differently.
Picking a force is from one of the three army lists in the game, Roman Legions, Barbarians and Parthians, in a familiar way, except the scenario being played adds restrictions to this. So, Raiding forces look very different to fortress garrison forces or those deployed for a field battle. Each army can be further characterised by its Stratagum, helping, along with the action cards, to bring the character of the army to the fore. Siege Train equipment, ruses and tactics are also available, but only in Siege Assault games.
The rules aren't scale specific, they will be playable at all scales, because the players pick the ground scale and measurements based on their miniatures collection and table-size. 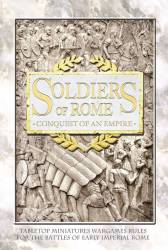 Type = Wargaming
Category = Wargaming Rules and Systems
Period = Ancient Rome
Material = Softcover Book
Date of Release = 2020-03-24
Status = Available
This item is Normally Stocked but may take up to two weeks for delivery if not in stock. We will notify you of any delays
MSRP: $44.00
Your price$44.00