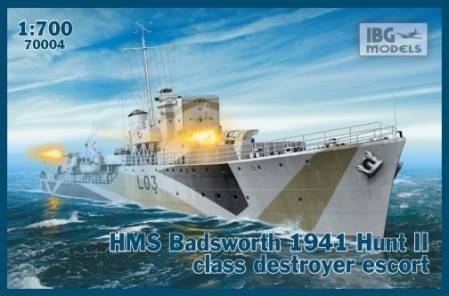 The Hunt was one of best known class of destroyer escort of the Royal Navy from World War II period. 86 Hunts of four types were completed, of which 72 were commissioned into the Royal Navy and the remaining 14 were transferred to allied navies - norwegian, polish, greek and Free French. 20 ships of Hunt Type II class were ordered on September 1939. Second, final batch of 16 were ordered on December 1939. Armament of Hunt II class: 6 × QF 4 inch Mk XVI guns on twin mounts, 4 × QF 2 pdr Mk VIII on quad mount, 20 mm Oerlikons on single mounts and depth charges. Seven ships of this type were lost in World War II.
HMS Badsworth was a Hunt II class destroyer escort, ordered by Royal Navy three months after the outbreak of World War II. Badsworths service started in March 1942, when she began her convoy duty in the North Western Approaches. In June 1942 she was transfered to Mediterrenean to take part in Operation Harpoon. The operations goal was to deliver vital supplies to the island of Malta, besieged by German and Italian forces. The operation ended with heavy losses on Allies side - only two out of six transport ships reached Malta. HMS Badsworth hit a mine, sustaining heavy damage, and was towed back for necessary repairs. She reentered service to join a convoy headed to Murmansk in November 1942. In March 1943 she was ordered to join another convoy to Malta, where she was damaged on a mine again. After being repaired in Liverpool HMS Badsworth was transferred to the Royal Norwegian Navy, where she served under the name of HNoMS Arendal.