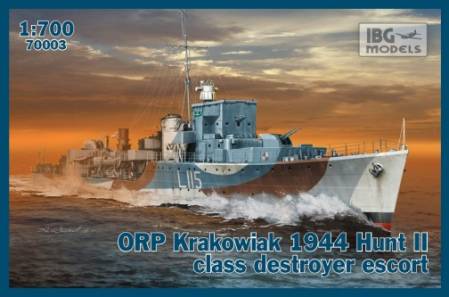 The Hunt was one of best known class of destroyer escort of the Royal Navy from World War II period. 86 Hunts of four types were completed, of which 72 were commissioned into the Royal Navy and the remaining 14 were transferred to allied navies - norwegian, polish, greek and Free French. 20 ships of Hunt Type II class were ordered on September 1939. Second, final batch of 16 were ordered on December 1939. Armament of Hunt II class: 6 × QF 4 inch Mk XVI guns on twin mounts, 4 × QF 2 pdr Mk VIII on quad mount, 20 mm Oerlikons on single mounts and depth charges. Seven ships of this type were lost in World War II.
ORP Krakowiak was a Hunt II class destroyer escort, built in 1940 as HMS Silverton. In 1941 it was given to the Polish Navy and received the name Krakowiak. It was a first Hunt class destroyer given to Polish Navy. After the crew training period it took part in escorting convoys on the Atlantic and in December 1941 aided in the Operation Anklet, allied raid on the German occupied Lofoten islands. In 1943 Krakowiak operated in the Mediterrenean, aiding in the Operation Husky (allied landing in Sicilly) and taking part in the battle of Dodecanese. In 1944 ORP Krakowiak fought in the La Manche channel during the landing in Normandy. It was given back to the Royal Navy in 1946.