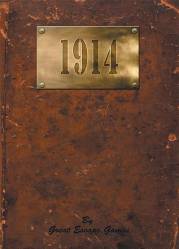 The Great War is usually portrayed and imagined with the blasted landscapes of the static,trench warfare that emerged late in 1914 and persisted late into the conflict. However, while it is fair to recognise that much of WWI was characterised by this stalemate, it is also fair to point out that the early and later parts of the war were witness to operations of manoeuvre in which armies sought to take key positions and outflank enemy forces.
And it is these early battles of WWI which inspired us, some friends in the industry, and some wargaming collaborators to focus on that particular period of WWI. Our aim was to produce a set of wargames rules that caters to this style of fighting and challenges the players with constant tactical decisions and does not burden them with a lot of rules. 1914 shares some mechanisms with our WWII game, Iron Cross, so players familiar with that ruleset will recognise this one. It plays differently to Iron Cross, however, and uses some mechanisms that are unique to 1914.
The battalion is the core tactical element in the game, in a formation that is roughly the size of a British brigade. The game mechanics are easy to grasp and make the game flow smoothly and ensure that both sides are always involved, especially when an opponent is activating units. 1914 is a game in which players act as the overall commander for the battle, developing and co-ordinating a plan for the achievement of operational objectives, and entrusting individual battalions to execute those plans. It is purposely uncomplicated to allow players to concentrate on the scale of the battle, but the action/reaction system ensures that all players are involved at all times, making tactical decisions affecting their own commands.


Type = Wargaming
Category = Wargaming Rules and Systems
Period = World War 1
Material = Softcover Book
Date of Release = 2018-06-30
Status = Available
This item is Normally Stocked but may take up to two weeks for delivery if not in stock. We will notify you of any delays
MSRP: $28.00
Your price$28.00