Complete dry transfer markings for one large and one medium US Ambulance. Comes with detailed history and directions.To mark ambulance vehicles, the International Red Cross symbol was standardized on by most western armies during World War I. The US Army standardized its markings by size for specific vehicles during the Second World War, and these remain in service to this day. While some of the markings are still formed from decals attached to the vehicles, many newer ones - like the two AM General Hummer ambulances - use panels which can be folded up to reduce the obvious tactical signature of white and red markings in the field.The markings here are standardized and will fit on any ambulance vehicle. The large ones are designed for trucks in the 3/4 to 1 1/4 ton range (Dodge T214 series, M37B1, M725, M886, or M1010, plus the canvas topped M561 Gama Goat) and the smaller ones to fight on lighter vehicles (Willy’s MB with canvas, M38/M170, M151/M825, Weasel, and other light vehicles). 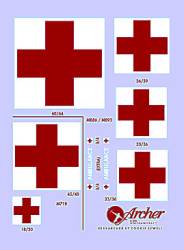