First Battle of the Marne- The Aisne 1914- Verdun- The Somme 1916- Chemin des Dames 1917-1918- Cambrai- The Kaiser’s Offensive- Second Battle of the Marne (The Ourcq, Chateau Thierry, Belleau Wood)- St. Mihiel- Champagne 1918- The Meuse-Argonne- and Breaking the Hindenberg Line. Major and Mrs. Holt’s Concise Illustrated Battlefield Guide to the Western Front - South contains many fascinating but little-visited areas by travelers and is hoped that they will be tempted further afield than the “showcase" and sophisticatedly presented battlefields like the Somme to discover some marvelous sites. Many of them have lain virtually dormant for many years (such as areas of the Meuse-Argonne and Champagne) but have recently been renovated and opened up by dedicated local enthusiasts. There are many gems in store in this book. Each battlefield starts with some pertinent quotations by participants, has a succint Summary of the Battle, Opening Moves, and What Happened sections, then a Battlefield Tour which follows the same tried and tested formula as the rest of the series of a timed and measured itinerary with historic and anecdotal information at each stop. A detailed Sketch Map showing battle lines and each stop on the route accompanies every battle using the same color code (yellow for memorials, purple for cemeteries, blue for museums) as the larger Holts’ Battle Maps. Together the two books Major and Mrs. Holt’s Concise Illustrated Battlefield Guide to the Western Front - South and North will form the most comprehensive and detailed English language guides to the World War I Western Front ever produced. 224 page softcover book with 300 color illustrations. 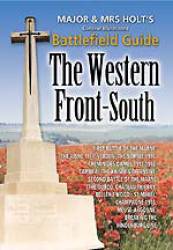