The Gloster Gladiator Mk.I was a British-built biplane fighter, used by the RAF and the Royal Navy (as the Sea Gladiator variant). It fought against stronger foes during the early days of the WW2, but it acquitted itself reasonably well in combat. The Gladiator saw action in almost all theatres during the WW2 with a large number of air forces. One of the best-known campaigns fought by Gladiators was the siege of Malta in 1940. Great Aces that gloriously piloted this aircraft were Dag Krohn, Marmaduke “Pat” Pattle and George Burges. 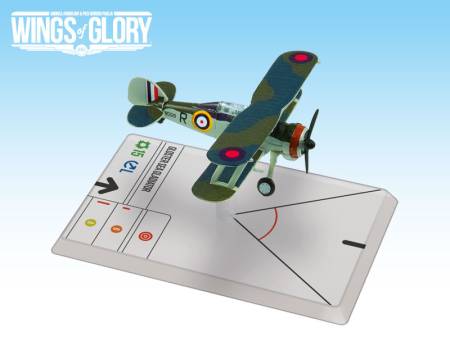 Designed to be used with the popular air combat game system created by Andrea Angiolino and Pier Giorgio Paglia, each WW2 Wings of Glory® Airplane Pack is a ready-to-play model, painted and assembled, 100% compatible with any other WW2 Wings of Glory game product.

In each pack you will find all you need to play with the airplane: a special base with gaming stats, a variable altitude flying stand, and a specific deck of maneuver cards.
This is not a complete game. You must own a WW2 Wings of Glory — Starter Set to play or WW2 Wings of Glory — Rules and Accessories Pack to play.

Type = Wargaming
Category = Wargaming Rules and Systems
Period = World War 2
Scale = 1/200 Scale
Material = Plastic
Finish = Pre-painted
Date of Release = 2012-11-01
Status = Available
This item is Normally Stocked but may take up to two weeks for delivery if not in stock. We will notify you of any delays
MSRP: $14.99
Your price$14.99