The HMS Bellona 1760 was the first of the class, which comprised other four ships were launched from 1760 to 1762. She had a long career, having served in the navy for over 50 years, an unusually long time for one of the old wooden ships.

The ship base, ship card and ship log are printed on two sides -the game data of a second ship is printed on the back. This ship pack can also be used to represent the British Ship-of-the-Line “HMS Goliath 1781”.

Designed to be used with the tactical ship-to-ship game system created by Andrea Angiolino and Andrea Mainini, each Sails of Glory® Ship Pack is a ready-to-play model, any other Sails of Glory game product. 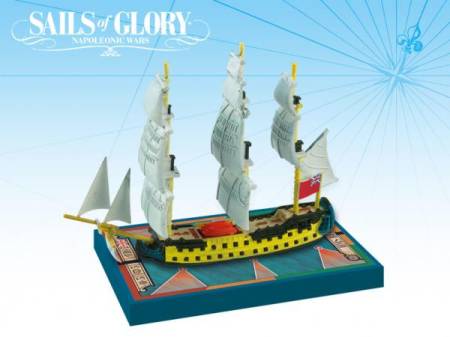 Type = Wargaming
Category = Wargaming Rules and Systems
Period = Napoleonic Wars
Scale = 1/1000
Material = Plastic
Finish = Pre-painted
Date of Release = 2013-05-04
Status = Available
This item is Normally Stocked but may take up to two weeks for delivery if not in stock. We will notify you of any delays
MSRP: $21.99
Your price$21.99