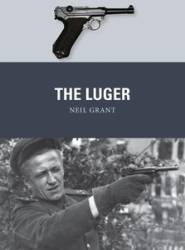 Patented in 1898 and produced from 1900, Georg Luger's iconic semi-automatic pistol became synonymous with Germany's armed forces throughout both world wars.
Initially chambered for the 7.65×21mm round, from 1902 the Luger was designed for DWM's 9×19mm round, which even today remains the most popular military handgun cartridge. It was adopted by the Imperial German Navy in 1904, followed by the German Army in 1908, receiving the name Pistole 08. Despite being supplanted by the Walther P38, the Luger remained in widespread service with all arms of Nazi Germany's armed forces throughout World War II, and even equipped East Germany's Volkpolizei in the years after 1945.
Featuring full-colour artwork, expert analysis and archive and present-day photographs, this engaging study tells the story of the Luger, the distinctive and deadly semi-automatic pistol that has come to symbolize Germany's armed forces in the 20th century.


Type = Books, Magazines, Catalogs and Videos
Category = Books- Osprey Weapons Series
Period = Modern
Material = Softcover Book
Date of Release = 2018-05-07
Status = Available
This item is Normally Stocked but may take up to two weeks for delivery if not in stock. We will notify you of any delays
MSRP: $20.00
Available
Empty Status
Our price $16.00