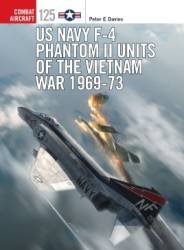 Although the F-4 Phantom II was the most important fighter-bomber to see action with all three American services during the Vietnam War, it was essentially a U.S. Navy design, and the carrier-borne squadron crews were its main operators in combat.

The aircraft pioneered the use of long-range, radar-guided missiles in combat, although the majority of its Vietnam missions involved ground-attack with a variety of innovative ordnance. From 1968 to 1973 the Phantom II was the standard U.S. Navy fighter in Southeast Asia, having replaced several other types. Its performance and versatility enabled it to perform a variety of different missions, and switch roles as necessary, in the assault on some of the world's most heavily defended territory. Including detailed colour profiles and first-person commentary from active participants in the F-4's naval combat history, this is a detailed study of the U.S. armed services' most famous post-war fighter.