Israel’s victory in the 1967 Six Day War sowed the seeds of the 1973 Yom Kippur War. At 1400hrs on October 6, 1973 the Egyptian army launched an assault crossing of the Suez Canal. The carefully coordinated attack achieved complete tactical surprise. The sand embankments of the Israeli Bar-Lev Line were breached and an Israeli counterattack thrown back with heavy losses. In the second of his two-volume analysis of the Yom Kippur War, Simon Dunstan details the fighting in the Sinai, culminating in Operation Gazelle, the Israeli counterattack across the Suez Canal. Although defeated militarily Egypt did ultimately succeed in forcing the Israelis back to the negotiating table. 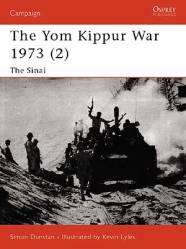 Type = Books, Magazines, Catalogs and Videos
Category = Books- Osprey Campaign Series
Period = Modern
Date of Release = 2010-01-01
Status = Available
This item is Normally Stocked but may take up to two weeks for delivery if not in stock. We will notify you of any delays
MSRP: $19.99
$15.99