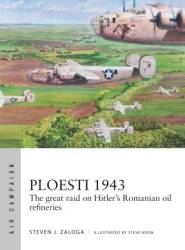 Operation Tidal Wave was one of the boldest and most controversial air raids by the United States Army Air Forces (USAAF). At the time, the Romanian Ploesti oil fields produced about a third of all Axis oil, and was Germany's single most important fuel source. In the summer of 1943, the USAAF decided to stage a major raid on Ploesti from air bases in Libya. The resulting Operation Tidal Wave raid on 1 August 1943 was one of the costliest to date, losing 53 aircraft, about a third of the starting force. Of the more than 150 bombers that took part in the raid, only 88 B-24s returned to Libya, 55 of which were damaged. On the other hand, of the 17 Medals of Honor awarded to US soldiers and airmen from Pearl Harbor in 1941 to D-Day in 1944, 5 were awarded to pilots of the Tidal Wave mission in recognition of their extraordinary performance. Although undoubtedly bold and heroic, the mission had questionable results. Initial assessments argued that the mission caused 40% of the refinery capacity at Ploesti to be lost but subsequent studies concluded that the damage was quickly repaired and that output had exceeded August levels within a month.
This new study examines the raid in detail, exploring the reasons why its dubious success came at such a high price. Supported by maps, diagrams, and full-colour artwork including battlescenes and bird's-eye views, this is the full story of the audacious Ploesti raid of 1943.


Type = Books, Magazines, Catalogs and Videos
Category = Books- Osprey Air Campaign Series
Period = World War 2
Material = Softcover Book
Date of Release = 2019-09-03
Status = Available
This item is Normally Stocked but may take up to two weeks for delivery if not in stock. We will notify you of any delays
MSRP: $24.00
$19.20