Second Edition.
Muskets & Tomahawks is a set of rules for recreating skirmishes during the major wars of the 18th and 19th centuries.
This “small war” is intrinsic to military campaigns and encompasses a huge variety of situations: reconnaissance missions, raids on enemy villages, attacks on convoys and outposts, and much more.
Muskets & Tomahawks sees you lead a detachment of between twenty and over a hundred figures in thrilling and tactical battles. Centred on the card-based activation of different troop types, with innovative mechanics that recreate the chaos of these kinds of encounters, Muskets & Tomahawks lets you replay the great wars of the age of black powder: the French and Indian Wars, the American Revolution, Napoleon’s campaigns, the American Civil War, and the multitude of colonial conflicts fought by the empires of Europe.
In this book you will find the core rules, as well as a set of special rules to recreate the peculiarities of the small war: spotting the enemy, hidden movement, the varying reactions of units with different doctrines, combat in unusual conditions, and officers’ ambitions and personal intrigues. Apart from this rulebook, you’ll  need the Muskets & Tomahawks supplement that covers the period you want to recreate to start playing your first games 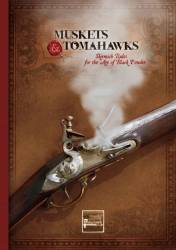 Type = Wargaming
Category = Wargaming Rules and Systems
Period = French and Indian War and Seven Years War
Material = Softcover Book
Date of Release = 2021-01-21
Status = Available
This item is Normally Stocked but may take up to two weeks for delivery if not in stock. We will notify you of any delays
MSRP: $39.00
Your price$39.00