The first expansion to the rules covers the Befrieungskrieg 1813 - 14, the famous War of Liberation where the combined forces of Austria, Prussia, Russia, Britain and Sweden. This campaign was chosen not only because of the many colorful armies involved, but also due to the fact that reform and Napoleon not being at every battle actually gives the Allies a fighting chance. It was also decided to concentrate on battles both large (Dennewitz) and small (Schestedt), but emphasizing engagements that are not that well known.

Introduction - includes conversion schemes for Grande Armee, Napoleon's Battles and Volley & Bayonet. Blank Labels - to copy and use when you create your own scenarios. Imperial Glossary - Chasseur a Cheval de la Garde Imperial means what? Age of Eagles Supplement - the latest optional rules and interpretations.
Notes - for all the scribbling every gamer needs now and then. 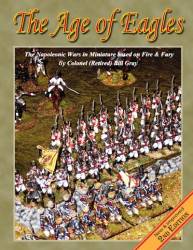 Type = Wargaming
Category = Wargaming Rules and Systems
Material = Softcover Book
Date of Release = 2015-10-28
Status = Available
This item is Normally Stocked but may take up to two weeks for delivery if not in stock. We will notify you of any delays
MSRP: $30.00
Your price$30.00