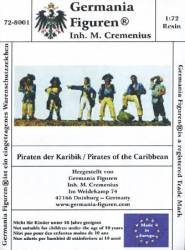 There were many reasons why men would become pirates, but thanks in part to Hollywood they have a quite undeserved glamour in some quarters today. As far as we know this is the first time pirates have been modelled in resin, and for their first set Germania Figuren have chosen poses in a very non-combative mood. We find men largely stationary, which makes them highly suited to populating a model of a ship. Of course pirates spent very little of their time in battle, but instead most time was spent in the tedious task of running the ship, including working in the rigging and so on. These figures do not have the feel of such men either, so they are perhaps taking a moment's break during their normal activities. In the case of the better dressed men, whom we might assume to be in charge, they might be directing operations. All the poses are really nice and seem perfectly appropriate although are far from exciting.

With their tricorn hats etc. these look to come from the golden age of piracy in the 17th and 18th centuries, and of course there was no pirate uniform just as there was no uniform amongst merchant seamen or those employed by national navies of the time. With regards to clothing practicality was the most important feature, and everyone here looks authentic. The two figures that we assume to be in a position of authority are naturally better dressed as they would not have to do the manual work of the crew, and some pirate captains were reputed to be regular dandies in the exotic nature of their dress, particularly when coming ashore. However the fourth figure in our picture looks remarkably neat and trim in his gentlemen's coat, and would seem to make a better navy officer than a pirate. Only one man is barefoot, despite bare feet being very common on board for very practical reasons, so perhaps some of these men, who are quite well dressed for ordinary crew, are in fact ashore, when more of an effort was made to look your best.

The sculpting of these figures is superb, with abundant crisp detail, thoroughly life-like clothing and great anatomy. They are a shade too tall for the claimed 1/72 scale, but are undoubtedly beautiful figures with no flash or other imperfections. This is a lovely set which has some excellent studies of pirates at ease and is to be recommended.