A comprehensive atlas based on the Arthur Banks atlas first published in 1975. The maps in the original were all painstakingly hand-drawn in black and white, covering every aspect of the first truly global war. This book takes the information laid down by Banks and reinterprets it in full color, computer modeled cartography. The book covers the main reasons why the major powers entered the conflict, the individual battles fought along the Western Front as well as in depth coverage of the war in the east of Europe. The War at sea is mapped in great detail, including the clashes at Dogger Bank and Jutland as well as the German submarine campaigns and the first major sea borne landing at Gallipoli. The First World War saw the first extensive use of air power, maps show the routes taken by the German Zeppelin raids on eastern England as well as the Allied strategic bombing effort at the end of the war.
In Arthur Banks own words:
“I hope that the book will be a convenient reference work which deals with those areas where a more detailed examination in cartographical terms has long been demanded. 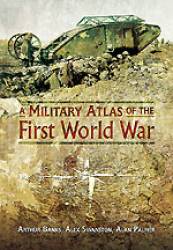 Type = Books, Magazines, Catalogs and Videos
Category = Books- World War 1
Period = World War 1
Material = Hardcover Book
Date of Release = 2015-07-06z
Status = Available
This item is Normally Stocked but may take up to two weeks for delivery if not in stock. We will notify you of any delays
MSRP: $32.99
$26.39