Following his first book in the TankCraft series on the British army’s Shermans during the battle for Normandy, Dennis Oliver has compiled a companion volume on those used by the US Army throughout the campaign in Western Europe. These were the tanks that made up the bulk of the American armoured forces that swept across occupied France and advanced into Hitler’s Germany.
Wartime photographs and carefully researched, exquisitely presented colour illustrations show in detail the types of Sherman – including the main variants – that played a vital role in Allied operations. As with all the books in the TankCraft series, a section of this work displays available model kits and aftermarket products, complemented by a gallery of beautifully constructed and painted models in various scales. Technical details as well as modifications introduced during production and in the field are also explained.
This book will give the modeller all the information and knowledge required to recreate an authentic miniature representation of the most famous American armoured vehicle of the Second World War. 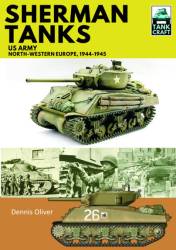 Type = Books, Magazines, Catalogs and Videos
Category = Books- Armor-Artillery-Vehicles
Period = World War 2
Material = Softcover Book
Date of Release = 2019-11-02
Status = Available
This item is Normally Stocked but may take up to two weeks for delivery if not in stock. We will notify you of any delays
MSRP: $22.99
$18.39