The Elizabeth class was almost identical in size, layout, and structure to the Bellona class, and had only slight variations in the shape of the underwater hull. The Elizabeth class ships of the line were a class of eight 74- gun third rates, designed for the Royal Navy by Sir Thomas Slade.

The Elizabeth Class comprised six ships: one of them was the HMS Berwick 1775, which fought the French at the Battle of Ushant (1778) and the Dutch at the Battle of Dogger Bank (1781). Captured during the French Revolutionary Wars, she served under the name Le Berwick with some success and at the start of the Napoleonic Wars until the British recaptured her at the Battle of Trafalgar.

The ship base, ship card and ship log are printed on two sides -the game data of a second ship is printed on the back. This ship pack can also be used to represent the French Ship-of-the-Line “Le Swiftsure 1801”. 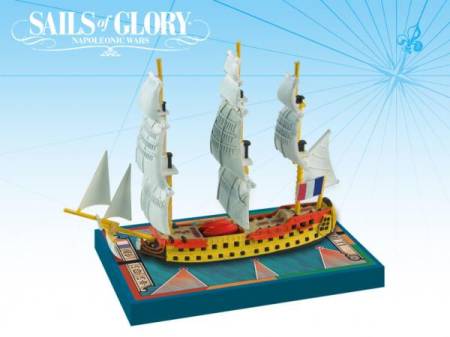