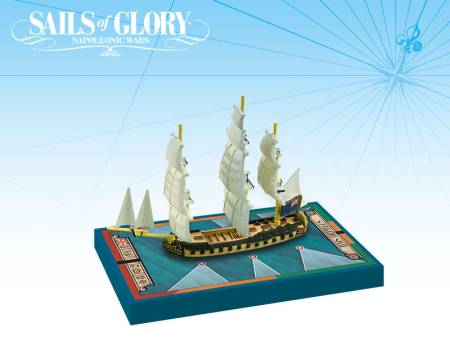 The Amazon Class frigates of 1773 were fifth-rate, 32-guns British ships with a main battery of 12-pounder guns, plus 18-pound carronades and 6-pounder guns in the quarterdeck and in the forecastle. The designed crew was of 220. It comprised 18 ships; the Amazon, Ambuscade and Thetis were launched in 1773; the second batch - Cleopatra, Amphion, Orpheus, Juno, Success, Iphigenia, Andromache, Syren, Iris, Greyhound, Meleager, Castor, Solebay, Terpsichore and Blonde - were launched in 1779 to 1787.
HMS Orpheus was a 32-gun fifth rate frigate of the Royal Navy. She was launched in 1780, and served for more than a quarter of a century, participating in numerous actions, mostly in the East Indies against French and Dutch ships, and later in the North Sea and Jamaica. She was wrecked in 1807 sailing toward Port Royal. This ship pack can also be used to represent the British Amazon frigate "HMS Amphion 1780".

Type = Wargaming
Category = Wargaming Rules and Systems
Period = Napoleonic Wars
Scale = 1/1000
Material = Plastic
Finish = Pre-painted
Date of Release = 2015-02-22
Status = Available
This item is Normally Stocked but may take up to two weeks for delivery if not in stock. We will notify you of any delays
MSRP: $17.99
Your price$17.99