The Commerce de Bordeaux was funded by a “don des vaisseaux “ (fundraising) donation from Bordeaux. She was laid dawn in 1784 and acquired in 1785. Renamed Timoléon in 1794, she took part in the Battle of the Nile under Captain Louis-Léonce Trullet, and was the last fighting French ship of the battle, exploding after three days, on August 2nd.

The ship base, ship card and ship log are printed on two sides -the game data of a second ship is printed on the back. This ship pack can also be used to represent the French Ship-of-the-Line “Duguay-Trouin 1788”.

Designed to be used with the tactical ship-to-ship game system created by Andrea Angiolino and Andrea Mainini, each Sails of Glory® Ship Pack is a ready-to-play model, painted and assembled, 100% compatible with any other Sails of Glory game product. In each pack you will find all you need to play with the ship: a special base with gaming stats, a ship log and a specific deck of maneuver cards. 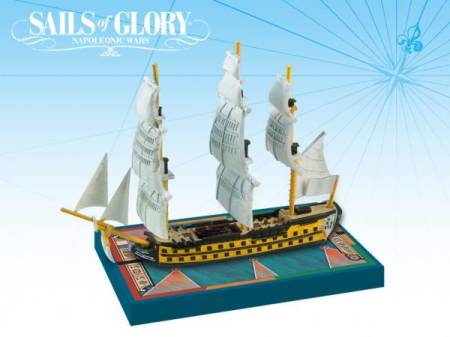